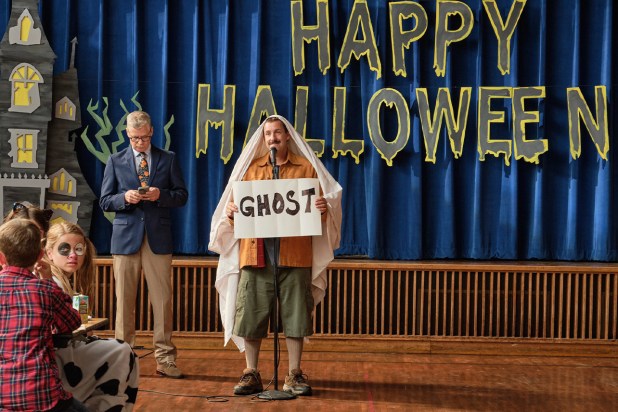 After his dramatic turn in Uncut Gems, Adam Sandler is returning to his comedy roots. Netflix shared a first look at Sandler’s upcoming movie, Hubie Halloween, and it’s about as far from a Safdie Brothers project as you can get. Sandler stars in the Halloween-themed comedy as Hubie Dubois, a deli worker who finds himself solving a murder mystery.

“Despite his devotion to his hometown of Salem, Massachusetts (and its legendary Halloween celebration), Hubie Dubois is a figure of mockery for kids and adults alike. But this year, something really is going bump in the night, and it’s up to Hubie to save Halloween,” reads the film’s official Netflix description.

The timing of the film has fans thinking Sandler is carrying out his promise to make the worst film ever after his Uncut Gems Oscar loss. Last year, Sandler vowed he would create a truly awful film if he didn’t take home an Academy Award for his Howard Ratner performance. And sure enough, he wasn’t even nominated for Best Actor at the Oscars. “If I don’t get it, I’m going to fucking come back and do one again that is so bad on purpose just to make you all pay,” he said. “That’s how I get them.”

When the first look images and news of the film were released today, fans speculated that Hubie Halloween very much could be Sandler’s Uncut Gems revenge film.

REMINDER: Adam Sandler didn’t win the Oscar for ‘Uncut Gems’, which means this could very will be “so bad on purpose” if Sandler kept his word. pic.twitter.com/G3E3pWCQ7e

But, a quick investigation into Hubie Halloween‘s filming schedule disproves any theories that this is Sandler’s big revenge. According to Boston.com, the actor wrapped up filming the Halloween comedy in Massachusetts in August of 2019, long before the Oscar nominations were announced — or even before Uncut Gems was released in theaters. So, that can only mean one thing: even is Hubie Halloween is truly bad, we have something much worse coming our way.