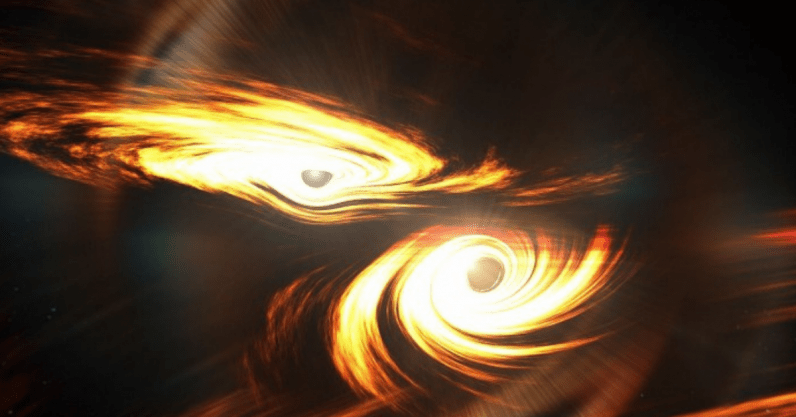 An international team of astronomers witnessed the birth of the first intermediate-mass black hole ever detected. On May 21, 2019, a pair of gravitational wave observatories — The Laser Interferometry Gravitational-wave Observatory (LIGO) in the United States, and Virgo, a three-kilometer-long detector in Italy — detected an unusual signal, dubbed GW190521.

This signal, resembling four short wiggles, lasted less than a tenth of a second. Yet, it revealed the formation of the first intermediate-mass black hole ever discovered.

It’s impolite to ask a black hole its mass

One of the bodies involved in this event was a black hole possessing a mass 85 times that of the Sun. This was, in itself, an unexpected finding — this mass is thought to be unstable, preventing the formation of black holes of this size. A pair-instability mass gap is thought to exist for black holes, preventing the formation of these objects over a range of masses, including ones like this one.

The other black hole involved in this merger comes in with a mass around 66 solar masses.

Black holes can form in the modern Universe from the collapse of supermassive stars that run out of fuel at the end of their lives. These stellar-mass black holes are the most common type of these objects, and typically measure a few tens of times more massive than our Sun.

Near the center of galaxies, supermassive black holes are the monsters of the Cosmos, having masses between several hundred thousand to billions of times more mass than our parent star.

However — the larger of the two participants in the collision, as well as the black hole the collision produced, have masses greater than stellar-mass black holes — in fact, black holes as large as the one produced in this collision were thought not to exist.

Stars live out most of their lives balanced between the forces of nuclear reactions pushing outward on a star and gravity pulling it inward. As the star ages, it fuses continually heavier elements, until iron is produced and nuclear fusion ceases. Then, gravity wins out, and the star collapses on itself, creating a core-collapse supernova, occasionally producing a black hole.

For stars up to 130 solar masses, this typically produces black holes with masses around 65 times as great as the Sun. However, in more massive stars, highly-energetic photons of light convert into matter — electron and positron pairs. These exert less pressure on the dying star, destabilizing the star, resulting in an explosion.

“[T]he star collapses when radiation pressure is reduced. As it collapses, the star heats and becomes [denser], which triggers explosive nuclear reactions. It’s these which disrupt the star,” Berry tells The Cosmic Companion.

Stars of more than 200 solar masses overcome this, and can collapse directly into black holes of 120 times the mass of the Sun or greater.

However, this suggests that black holes should not have masses between 65 and 120 times that of our Sun. The larger of the two bodies involved in this event was around 85 solar masses, challenging this pair-instability mass gap.

“After so many gravitational-wave observations since the first detection in 2015, it’s exciting that the universe is still throwing new things at us, and this 85-solar-mass black hole is quite the curveball,” Chase Kimball, a Ph.D. student at Northwestern stated.

If this body were not formed directly from the collapse of a star, researchers believe it may be the product of the merger of two or more black holes, in a process known as a hierarchical merger.

The collision, which took place 16.3 billion light years from Earth, left behind a black hole measuring 142 times the mass of our own Sun. Energy from this eruption, which took place when the Universe was roughly half its current age, spent roughly seven billion years traversing the Universe before reaching Earth. This makes this collision the most distant object ever recorded by a gravitational wave observatory.

“This doesn’t look much like a chirp, which is what we typically detect. This is more like something that goes ‘bang,’ and it’s the most massive signal LIGO and Virgo have seen,” said Nelson Christensen, a researcher at the French National Centre for Scientific Research.

Considering the gravity of the situation

Gravitational waves are ripples within the fabric of spacetime. Large events, such as collisions between massive objects, can create ripples in spacetime, like those produced as a rock is tossed in a pond.

Searching for gravitational waves is the newest branch of astronomy, requiring detectors of enormous size. LIGO is four kilometers long, and Virgo is three-quarters of that length.

As the pair of black holes spiraled around their common center of gravity, they also rotated, much as the Earth rotates once a day as we go around the Sun each year. The axis of their rotations (think of a line pushed through the north and south poles of Earth) was off-kilter to the plane at which the black holes circled each other. This resulted in a precession of the black holes, like a spinning top slowly dying out, its axis coming closer to the floor with each rotation.

When the two black holes met, the collision formed a new black hole with a mass of 142 solar masses, and the equivalent of eight solar masses of matter was converted to energy in the form of gravitational waves, which spread throughout space.

This event marks the most massive source ever detected by astronomers using instruments designed to detect gravitational waves. This discovery brings physicists one step close to understanding the nature of one of the strangest objects in the Universe — black holes.

This article was originally published on The Cosmic Companion by James Maynard, founder and publisher of The Cosmic Companion. He is a New England native turned desert rat in Tucson, where he lives with his lovely wife, Nicole, and Max the Cat. You can read this original piece here.

Astronomy News with The Cosmic Companion is also available as a weekly podcast, carried on all major podcast providers. Tune in every Tuesday for updates on the latest astronomy news, and interviews with astronomers and other researchers working to uncover the nature of the Universe.The first intermediate mass black hole ever seen has been discovered by astronomers, forming from the collision of a pair of smaller black holes. Interestingly, one of these had a mass that should not be allowed by our current understanding of these enigmatic objects.