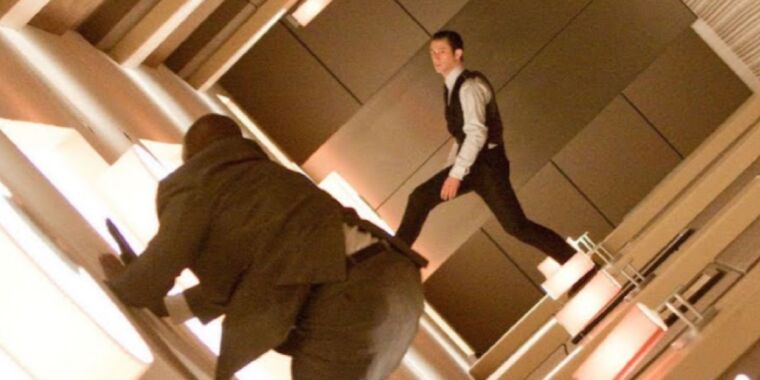 Director Christopher Nolan’s hotly anticipated new film Tenet is finally playing in select theaters. But not everybody is able to watch it—New York, Los Angeles, and San Francisco are all major US markets where theaters remain closed. If you’re not among those lucky enough to live near a reopened theater where the film is showing—and you’re not keen on driving for four hours to find an open theater—now is the perfect time to revisit what is arguably Nolan’s masterpiece: the mind-bending thriller, Inception, which marks its tenth anniversary this year. The film grossed over $829 million globally and was nominated for eight Oscars, winning four. (It lost the Best Picture Oscar to The King’s Speech.)

(Spoilers below, because it’s been ten years.)

Nolan first submitted his treatment for a horror film involving “dream stealers” to Warner Bros. back in 2002, but decided he didn’t yet have sufficient experience as a director to do justice to what he envisioned, which he knew would require a large budget. “As soon as you’re talking about dreams, the potential of the human mind is infinite,” he told the New York Times in 2010. “And so the scale of the film has to feel infinite. It has to feel like you could go anywhere by the end of the film. And it has to work on a massive scale.”

So he made Batman Begins (2005), The Prestige (2006), and The Dark Knight (2008), until he felt confident enough to revisit his old treatment. While writing the script, Nolan found inspiration in Blade Runner (1982), The Matrix (1999), and the works of Jorge Luis Borges, particularly the short stories “The Secret Miracle” and “The Circular Ruins.” The former features time slowing down to forestall a death; the latter is about someone constructing a person in his dreams and beginning to question his own reality. Both elements play crucial roles in Nolan’s fictional world.

Inception is a master class in elaborate world-building. Nolan originally wrote the script as a heist film, before deciding against it, telling the Los Angeles Times that the story relied too heavily “on the idea of an interior state, the idea of dream and memory” for a straightforward heist framework to really work. But those heist elements do provide a useful scaffolding for the intricate plot.

Leonardo DiCaprio (Titanic, The Revenant) stars as Dom Cobb, an “extractor” who conducts corporate espionage for his clients by infiltrating a target’s subconscious via a shared dream world. Cobb is an American in exile, wanted in the United States for allegedly murdering his wife, Mal (Marion Cotillard, The Dark Knight Rises); their two children live with his father-in-law and former mentor, Professor Stephen Miles (Michael Caine, Batman Begins, The Dark Knight).

A Japanese businessman named Mr. Saito (Ken Watanabe, The Last Samurai, Godzilla) hires Cobb for a uniquely difficult and dangerous mission: not just stealing information from the target’s subconscious, but actually implanting an original idea and making the target think it was his own—the “inception” of the title. In exchange, he will make Cobb’s banishment from the US disappear so he can go home again.

So Cobb puts a team together, starting with his longtime associate, Arthur (Joseph Gordon-Levitt, Looper), who is skeptical that inception is even possible. Eames (Tom Hardy, The Dark Knight Rises, Mad Max: Fury Road) specializes in forgery and identity theft—he has the ability to impersonate other people within a dreamscape—and thinks it’s possible, just extremely difficult. Yusuf (Dileep Rao) is a rogue pharmacologist, recruited to engineer just the right combination of drugs for the mission. Cobb recruits one of Miles’ gifted graduate students, Ariadne (Ellen Page, The Umbrella Academy) as the “architect” of the dreamscapes. He himself is no longer able to safely do so, thanks to unwelcome dream intrusions by a psychological projection of Mal—the product of his own grief and guilt over her death.

The target is Robert Fischer (Cillian Murphy, Batman Begins, Peaky Blinders), heir to a business empire that is close to achieving global dominance, to the detriment of Saito’s own business interests. His father, Maurice Fischer (Peter Postlethwaite, Clash of  the Titans), is on his deathbed. The goal is to implant the idea for Robert to voluntarily break up his father’s empire, in favor of creating something of his own rather than merely inheriting what his father built.

Cobb and his team decide they must construct three separate dreamscape levels—a dream within a dream within a dream—each reaching deeper into Fischer’s subconscious, for the scheme to work. (Each level has its own distinctive look, thanks to director of photography Wally Pfister.) One person will be the “dreamer” for each level, remaining behind as the others proceed downward, responsible for setting up a coordinated “kick” to awaken the other team members. (Edith Piaf’s “Non, je ne regrette rien” serves as an auditory cue.) Things do not go quite as smoothly as they’d hoped when they put their plans into motion.

(Warning: Major spoilers below the gallery.)

One of the best aspects of the film is the skillful way Nolan keeps upping the stakes. For instance, the subconscious is not without its defenses. In the dreamscape, these defenses are personified by “projections”: human figures that inhabit the dreamscape (generated by the dreamer) and attack any detected intruder, much like the body’s immune system attacks a virus. Ariadne learns this the hard way when she starts messing with physical reality in Cobb’s test-run dreamscape. Also, the “kicks” on all three levels must be precisely coordinated to occur at the same time—despite the fact that time runs more slowly with each subsequent level. So ten hours in the real world translates into one week in the level-one dreamscape, six months in level two, and ten years in level three.

Nolan raises the stakes further on the first-level dreamscape, when Saito is mortally shot by a projection. One way to wake yourself up from a dream if things go south is to “die” in the dream. (The pain, however, is real, since “pain is in the mind.”) But the chemical cocktail Yusuf cooks up for their heist contains an added sedative, necessary to keep the three dream levels stable. The tradeoff: if you die in the dream, you don’t wake up, descending into “limbo” instead, where dreamers can become trapped in an infinite subconscious world, forgetting that they are in a dream.

Inception boasts some positively jaw-dropping visuals—like Arthur demonstrating a life-sized model of Penrose stairs to Ariadne—and set pieces, including a conceptual fight scene for the ages. On the second level, Arthur finds himself facing off against another of Fischer’s aggressive projections in a hotel corridor, just as the white van holding the dreamers on the first-level barrel-rolls down an embankment. The physical effects ripple down to the second level, causing the entire corridor to rotate as the men are fighting. To film it, Nolan’s crew built a hotel corridor set powered by two powerful electric motors so it could rotate 360 degrees. That way it would look like the direction of gravity was changing constantly as Arthur and his assailant were fighting. Gordon-Levitt likened the experience to being spun in a “giant hamster wheel,” telling Details he came home “battered” every night while filming that scene.

Later in the film, Yusuf sets off the “kick” in level one by literally backing the van off a bridge and letting it fall into the river below. This puts the dreamers into freefall, which also ripples down to the levels below, causing an avalanche on level three, and an inconvenient “suspension” of gravity on level two. Poor Arthur has to figure out how to “drop” his dreamers in zero gravity to initiate the kick, and fortunately remembers Albert Einstein’s famous elevator thought experiment, one of the physicist’s seminal breakthroughs as he was devising his general theory of relativity.

That scene provides a solid example of the equivalence principle. Acceleration is motion in which either an object’s speed or direction (its velocity) changes. Mathematically, acceleration and gravity are equivalent, just like energy and mass. If you’re riding in the elevator and someone cuts the cable, you’ll go into free fall and start to float—precisely what happens to Arthur’s level-two dreamers. Since both you and the elevator are falling at the same rate, you won’t be able to feel gravity’s pull. Arthur’s solution is to tie all his dreamers together and herd them into an elevator, and then set off charges at the agreed-upon time so that the elevator drops rapidly, instigating the requisite “kick.”

Psychologists might not find Inception quite as conceptually appealing as physicists.

Psychologists might not find Inception quite as conceptually appealing as physicists and the average filmgoer, although Harvard psychologist and dream researcher Deirdre Barrett gave Nolan’s film props for accurately illustrating how real stimuli can be incorporated into dreams. Specifically, in one scene, a dreaming Cobb is dropped into a bathtub filled with water as a “kick”; in the dreamscape, water crashes into the room where he is standing.

Others might be more harsh in their assessment of the film’s scientific accuracy. When Inception first came out, my spouse and I had dinner with noted psychologist and author Carol Tavris. We raved about the film, but Tavris found its very premise—that it would be supremely difficult to implant an original idea in other people’s minds, and have them believe it is their own—to be ludicrous. “Inception is easy,” she declared, citing the work of University of California, Irvine, cognitive psychologist Elizabeth Loftus, who studies memory—particularly the controversial topic of the creation of false memories.

As Arthur says in the film, planting an idea in someone’s head is simple enough: tell people not to think of pink elephants, and images of pink elephants will dance in their heads. But they’ll know that the pink elephants came from your suggestion. Loftus’ research showed that it’s possible to implant a false memory just with the power of suggestion, and that implanted memory will seem as real as something that actually happened. They will believe the pink elephants were their idea all along.

Does it ultimately matter? Not one whit, because Inception is first and foremost top-notch entertainment. That’s why it holds up ten years later, and is still provoking debate—mostly about Nolan’s ambiguous ending. Cobb has a small spinning top that he uses as a totem: something to reassure him that he is indeed awake in reality and not still dreaming. If he spins the top, and it eventually wobbles and stops spinning, the world is real. If it keeps on spinning indefinitely, he’s still dreaming.

But in the final scene of the film, Nolan deliberately cuts away to the credits after Cobb spins the top, never letting us see if it ever wobbled. So did Cobb find his way back into the real world to be reunited with his children? Or is he forever trapped in limbo—an infinite dream? Nolan still refuses to answer that question. “The real point of the scene… is that Cobb isn’t looking at the top,” he told Entertainment Weekly. “He’s looking at his kids. He’s left it behind. That’s the emotional significance of the thing.” Whether you choose to accept Nolan’s interpretation is up to you.