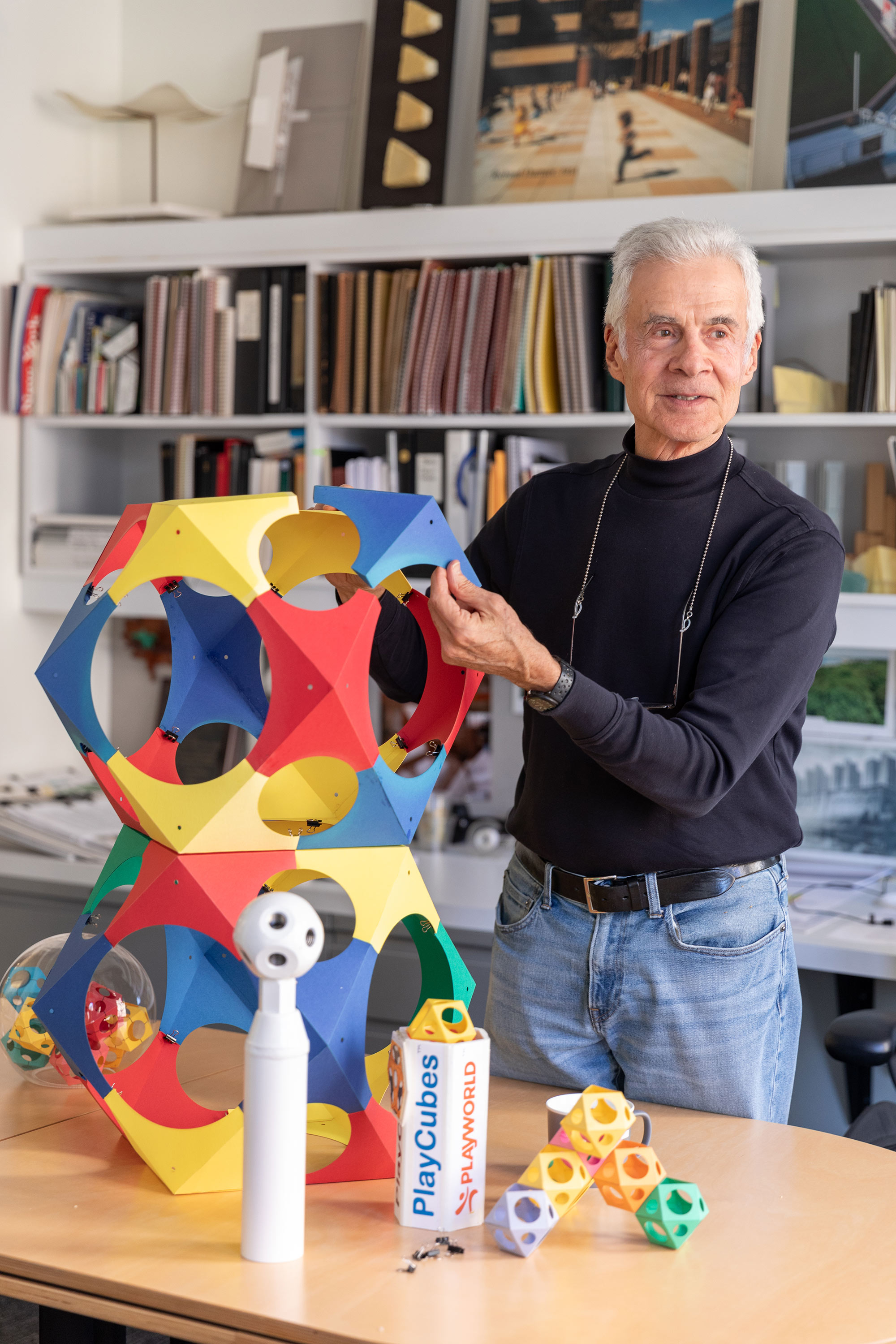 A large geometric concrete structure sits on the busy corner of Canal and West Streets in Lower Manhattan. Passersby wondering at its function may guess it’s a museum, or an art gallery. Few are likely to hit on the reality: a salt shed. And that was exactly the intent, says Richard Dattner ’60, lead designer of the project.

“Our job was to design what is really a mundane box holding 5,000 tons of salt—but to design it for one of the most important corners in New York City,” he says. “In the end, it turned out the way the city wanted it—iconic, enigmatic, and somewhat mysterious.”

Completed in 2015, the salt shed was the most recent project that Dattner, now 82, led for his firm Dattner Architects. It caps a legacy that includes such essential but often unnoticed infrastructure elements as water treatment facilities, sludge dewatering plants, marine transfer stations (where garbage is loaded onto barges), and sanitation garages—projects that Dattner says many architects wouldn’t have taken on. His portfolio also includes tens of thousands of affordable housing units, the new 34th Street–Hudson Yards subway station, and Hudson River Park, as well as schools and health-care facilities.

“When I started out, large established firms were not interested in civic work,” explains Dattner. “These projects have complicated processes normally designed by mechanical or sanitation engineers. Because of my background at MIT, I always had an interest in large-scale infrastructure and collaborations with engineers.”

Dattner Architects now employs more than 100 architects, but its first office was Dattner’s living room. After MIT, he worked at several New York firms while teaching at Cooper Union and the City College of New York (later, he also taught at the University of Wisconsin).

“After being laid off or fired by six firms, I realized that I was not cut out for working at a large corporate architectural firm, so I went out on my own,” he says. His first big break, in 1964, was a job for Estée Lauder, founder of the self-named beauty company. “A builder I knew asked me, ‘Can you design a factory?’ and I said, ‘Of course I can,’” recalls Dattner. “Having been to MIT, I thought I could do anything.”

The Lauder family subsequently kicked off his civic work by commissioning him to design the Adventure Playground in Central Park. Playgrounds in the ’60s were bleak and unsafe, with little more than asphalt, seesaws, and monkey bars, Dattner says. His new model—incorporating tree forts, climbing poles, tunnels, sand areas, and water—became a prototype for playgrounds around the country.

Working with child psychologists and childhood development researchers, he wrote the book Design for Play in 1969. Following an interest sparked at MIT, he also designed and patented PlayCubes—climbing structures inspired by the cuboctahedron, a 14-sided polyhedron with eight triangular and six square faces first discussed by Archimedes in 230 BCE. “My contribution was to put holes in this shape so that kids could climb on top of it, in it, through it,” he explains. When they debuted in 1969, PlayCubes were made of fiberglass, which became cost-prohibitive. In 2016 Dattner relaunched the design with an American manufacturer, using both molded plastic and laser-cut steel.

Although Dattner no longer leads projects, he mentors staff and participates in design discussions: