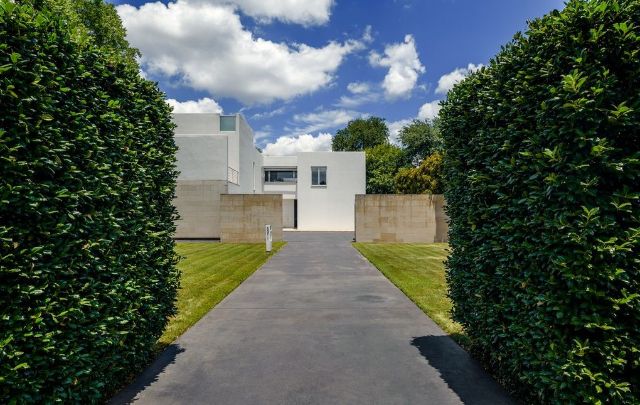 I shoved everything off my digital desktop Friday when I spotted this minimalist masterpiece designed by architect Lionel Morrison. This exciting listing was about three hours old, and I immediately started digging.

That digging unearthed an article or two because, of course, Morrison is an internationally recognized architect. As I dutifully read each one, I cross-referenced, made a few calls, and dug some more. So, it appears to me that the venerable Architectural Digest got it wrong. They reported this arresting modern masterpiece was a custom build for one of the most notable art collectors in America.

That depends on if you believe DCAD, which I do — well only as far as ownership goes. They often get build dates wrong. From my deep dive, I found it was actually built for a prominent doctor and his wife, who had a substantial art collection. After they decamped for the mountains, it indeed was sold to yet another collector, because, seriously, this is the perfect home for art.

It was built in 1997. Really. That’s the thing about these minimalist architect-designed homes. They do not age. They look as fresh today as the day they were built. That’s entirely down to the architect.

The reason those pedestrian white boxes popping up everywhere are boring is that there is little to no thought put into them. They are a distilled and bastardized version of greatness. All you have to do is look at a home like this to see what separates the proverbial men from the boys. Architects always make the difference. This home is a case in point.

Rooted in Japanese culture and in the De Stijl and Bauhaus movements of the 1920s, that less is more philosophy is at the core of minimalism. The idea put into basic terms is to create simplicity, balance, order, and harmony while retaining quality and paying attention to the relationship between the building and the environment.

The focus is on form, space, light, and materials. This creates the perfect setting for art collectors and is why it’s not surprising that this minimalist home has continued to draw collectors and creatives.

This home has 5,882 square feet, four bedrooms, and six bathrooms. There are two principal suites, one on each floor. A terrace off the second-floor suite overlooks the beautifully landscaped backyard and pool.

“A home should inspire, and this home is not only designed by a Dallas master of architecture, but it also has been inhabited and has inspired, some of Dallas’ most noted creators and drivers of the arts,” Halum said.

Halum has this private, magnificent, minimalist masterpiece at 5911 Glendora Avenue listed for $2.9 million.

As I preach constantly, if you like it move on it. Do I need to remind you how fast the multi-million dollar properties are flying off our market?