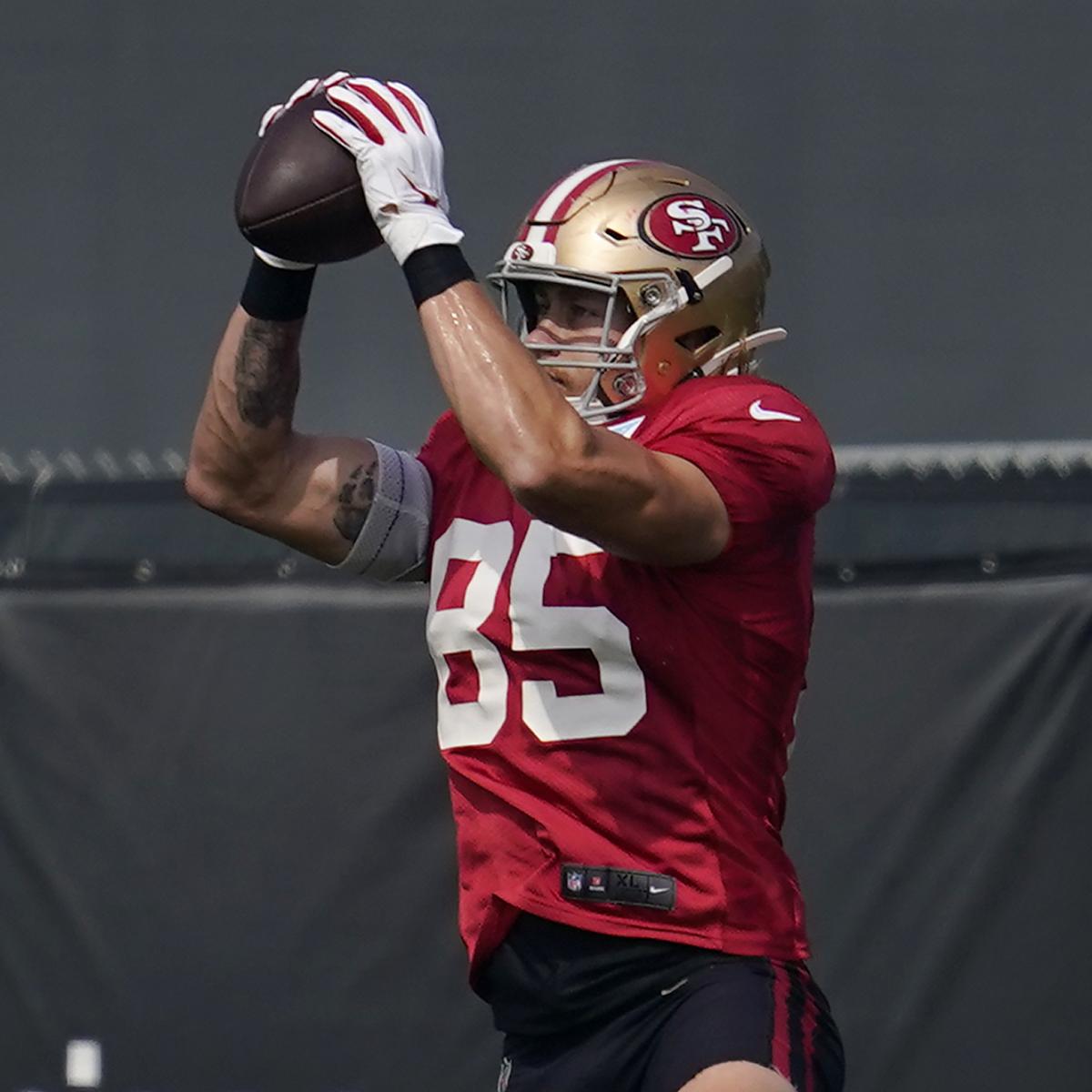 Two months after the Super Bowl, George Kittle was stuck at his Nashville, Tennessee, home looking for someone to throw him a football.

In a usual offseason, between OTAs and training camp, the San Francisco 49ers star tight end would train with a quarterback at a local high school, catching at least 100 to 150 balls a day. But this offseason was far from normal. The COVID-19 pandemic shut down access to high school fields, and OTAs were canceled. Now it was on Kittle—and every other NFL player—to find ways to stay sharp as the 2020 regular season approached.

He still needed to catch his daily allotment of balls, so he enlisted the help of two nearby arms: his wife, Claire, and his dad, Bruce.

At first, it was just Claire. She set up in their backyard, heaving high-point footballs over George’s head, low-point throws around his ankles and lob passes over his shoulders, 100 to 150 times per day.

“She complained after two days,” Kittle said with a laugh, noting he then added his dad to the rotation. “She was like, ‘I don’t know if I can do this anymore.'”

Because his workout partner wasn’t a person. It was a robot.

The device is called the Seeker. Instead of hands, it has six slots, like the cylinder of a pistol, with the ability to fire off every football in less than 10 seconds. Instead of a brain, it has an LED touch screen, programmable to throw anywhere you’d like, with pinpoint tracking technology that follows your every move. This offseason, the creators of the device nicknamed it the Quarantine Quarterback. Because interest in it has exploded in NFL circles during the pandemic.

“We have a 30- to 40-player waiting list—many of the top players in the league,” Bhargav Maganti said.

Maganti and Igor Karlicic, two Northwestern mechanical engineering graduates, created the Seeker five years ago at the University of Iowa with a team that now includes fellow Iowa students and former college football players. There, the robot went through nine iterations, transitioning from a hulking metal device with dangling wires to the sleek one it is today, all with one purpose in mind: to revolutionize how and where football players train.

But the creators never planned on hitting the NFL player market this soon.

“Our focus had been on NCAA programs entirely,” Karlicic said. “We wanted to impact the largest number of athletes possible.”

The Seeker, which was developed under Maganti and Karlicic’s company, Monarc, has two modes: robotic and manual. Unlike the classic JUGS machine, which requires someone else to feed the football into a slot, the Seeker’s robotic mode allows the participant to train alone via clip-on tracking technology that records their location. In manual mode, users can select where and how they want the football thrown, whether that’s a deep ball, a slant route or even a punt or kickoff, while adjusting for speed and hang time.

By the start of 2020, the $50,000 robot had already been purchased and used on the practice fields at LSU, Virginia, Iowa and SMU. In early March, Monarc delivered one to the University of Oklahoma, and it had scheduled meetings with big-time programs such as Alabama, Ohio State and Clemson.

Then the pandemic struck, and the meetings were canceled.

At first, Maganti and Karlicic weren’t sure where to pivot. But there was one obvious, emerging market: NFL players. The company had already been in touch with a few who loved the product. Former New England Patriots receiver Mohamed Sanu Sr. and 49ers quarterback C.J. Beathard had invested in the company.

Pittsburgh Steelers tight end Eric Ebron had shown interest in buying a Seeker, and so had Kittle, who was close with various team members at Monarc since their time at Iowa had overlapped during the company’s development phase. So Monarc posted a stream of videos of the Seeker in action to its Instagram and Twitter feeds, along with a call-out to NFL players, to see if anyone needed reps.

Danny Amendola was the first to bite.

The Detroit Lions receiver lives in Austin, Texas, only a three-hour drive from Monarc’s headquarters in Dallas. He asked if he could try it, so in mid-April, the team shuttled a 300-pound Seeker to Amendola’s front yard, where the shirtless receiver practiced one-handed catches in a Lions helmet and then posted the video to his Instagram page.

And the video went viral in NFL circles.

Quickly, the company was flooded with requests from other NFL players who wanted to try the robotic quarterback. Chris Godwin, Allen Robinson II and Mike Evans all caught passes from a Seeker this offseason. After watching enough clips, Los Angeles Chargers tight end Hunter Henry invested in the company—sight unseen.

“I was like, Dang, I just really think I want this thing. I had known enough without seeing one in person,” said Henry, who received his Seeker in June, the robot custom-designed in Arkansas Razorbacks colors to represent his alma mater.

Henry’s California townhouse is by the beach—he doesn’t have a backyard—so this offseason, he used the Seeker in his driveway, mainly on the robotic mode, catching 60 to 100 passes every session.

“My neighbors are very enamored by it,” he said. “Everybody stops. People will just sit there and watch me catch them.”

By July, Monarc had sold out of its inventory; the robot now costs $62,500. But the company was still posting videos of its new customers. Ebron used his Seeker in his backyard, catching 25-yard passes over his pool. Lions tight end T.J. Hockenson caught passes while his dog jumped at his side. Patriots receiver N’Keal Harry, another investor, picked passes from the air one-handed at a park. Sanu planted his Seeker in his driveway and then caught punts over his mansion in his backyard.

“The players are using literally 10-15 percent of the functionality that we built in,” said Karlicic, who added that the company will be receiving a new shipment of Seekers come fall, many of them already spoken for. “But it turns out even just the 10-15 percent of it that they’re using is completely worth it to them.”

Just ask Kittle. He said his Seeker, which features an emblem of The Joker along with the slogan “The People’s Tight End,” was “a lifesaver” during this uncertain offseason. “No offense to my wife or my dad, but it throws a better football than they can throw,” he said.

Kittle feels like he took a big step forward. He not only inked the largest contract for a tight end in NFL history (five years, $75 million), but after his Seeker arrived, he also caught 100 to 250 passes every day, five days a week. If someone helped him reload the six footballs, he could catch 400 in less than an hour.

Sometimes, he’d text clips of his workouts with the Seeker to his quarterback, Jimmy Garoppolo.