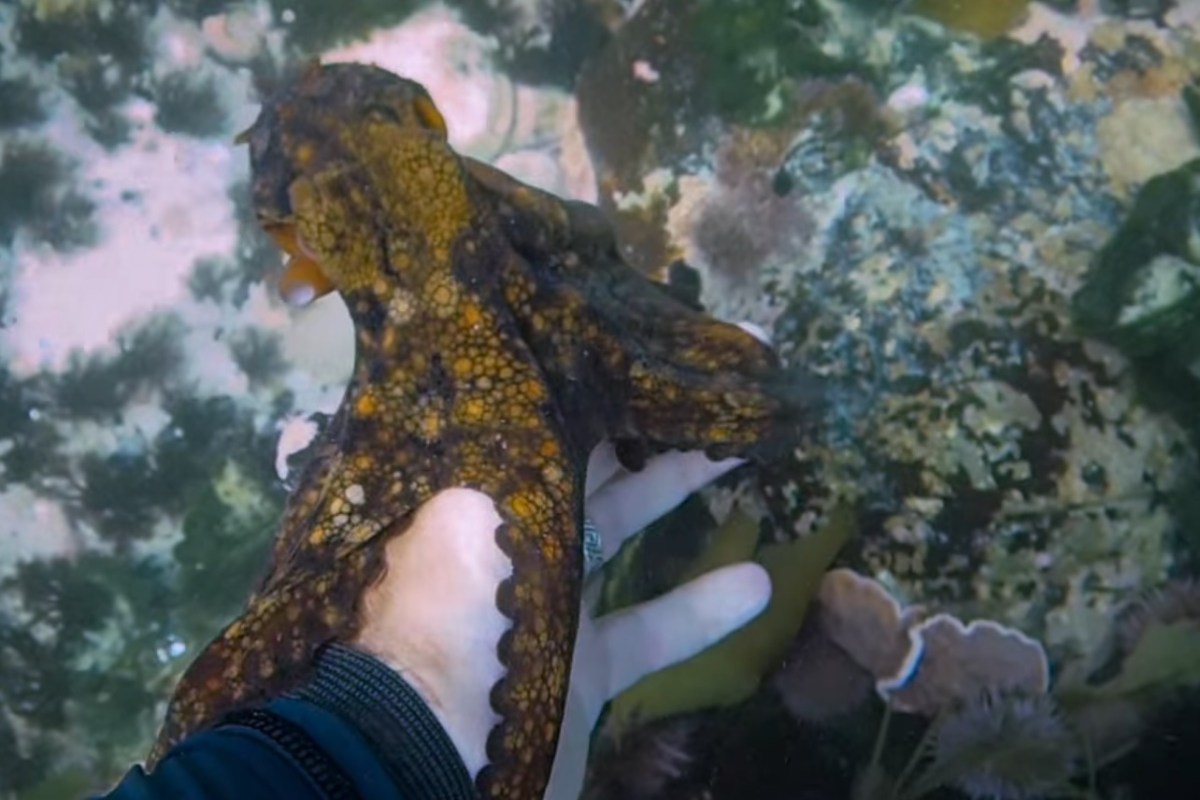 Netflix’s My Octopus Teacher is not your typical nature documentary. It’s the intimate diary of Craig Foster, a freediver and wildlife filmmaker who spent nearly a year observing an octopus in the kelp forests along the South African coast. And interacting with it, improbably. And befriending it, perhaps. And falling in love with it, absolutely. Maybe you will too?

‘MY OCTOPUS TEACHER’: STREAM IT OR SKIP IT?

The Gist: Craig was in a dark period of his life. He was often sleepless and anxious, and it was affecting his family and work. He had lost his passion for filmmaking. Years prior, he had followed trackers in Southern Africa’s Kalahari Desert, admiring their intimate and detailed knowledge of the area’s animals and landscape. He yearned for that same in-depth understanding of his natural surroundings. He sought therapy in the chilly, often violent waters of the Western Cape, preferring to dive without scuba gear or even a wetsuit. The cold “upgrades the brain,” he narrates, sharpening your focus and allowing you to fully immerse yourself in an alien environment. (And, I might add, in his diving cap, goggles, snorkel and long, slender swim fins, he looks rather alien himself.)

One day, while exploring a deep blue pool whose waters were calmed by the density of the kelp surrounding it, Craig saw a strange shape on the ocean floor: an octopus balled up and covered with an armor of rocks and shells. In an eyeblink, it abandoned its quasi-shell and rocketed away. “There’s something to learn here,” he remembers thinking. He returned, found the female octopus’ den, and visited it daily as it huddled in its little cave. Eventually, the creature realized Craig wasn’t a threat. It reaches out a curious tentacle and touches his hand, its suckers exploring his skin. He enjoys the moment as long as his lungs will allow, gently detaches and heads up to the surface for air.

Vowing to dive every day, Craig amazingly captures the octopus’ habits on film — hunting and feeding, avoiding predators (especially the tenacious pyjama shark), playing with schools of fish, using its elaborate, and dare I say artistic, camouflage abilities. It’s as if the creature has granted him exclusive access to the myriad dramas of its life. He visits her at night to watch her hunt, to the serenades of nearby humpback whales. He charts her behaviors on a hand-drawn map and a bulletin board full of photos. Sometimes, he brings his teenage son with him. This octopus is helping Craig to achieve his dream of being like those Kalahari trackers, to more profoundly understand the natural world — and to fulfill himself.

What Movies Will It Remind You Of?: Although they’re different in tone and perspective, Werner Herzog’s Grizzly Man comes to mind, not just because it’s one of the best nature docs ever made, but because it boldly explores how a person’s immersion in the natural world profoundly affects their mind.

Performance Worth Watching: If you’re not already convinced that octopus behavior is a sight to behold, it’s never gonna happen.

Memorable Dialogue: “Does she dream? And if so, what does she dream about?” — Craig gets very Werner Herzogian with his ponderings on an octopus

Sex and Skin: None.

Our Take: What’s striking about My Octopus Teacher is, it avoids the trappings of many cutesy nature docs that overly anthropomorphize its subjects. Craig is affectionate in his descriptions of his relationship with this octopus, but notably, he never gives her a name. We see marvelous images of the creature clinging to his chest as if embracing him, but he never implies that she’s capable of true affection. Although octopi are considered highly intelligent — especially for cephalopods — scientists debate whether they can truly “learn” things; Craig’s remarkable footage seems to show precisely that, but he doesn’t jump to any conclusions. Eventually, late in the film, he uses the word “love” to describe his feelings for this octopus, but throughout, he has doggedly tried to remain strictly observational, and not interfere with the course of nature.

But as the aforementioned quote about octopus dreams illustrates, Craig is human. When the octopus huddles in its den, recovering from a dangerous incident, he violates his oath and feeds it an oyster. And this is where Craig’s experience illustrates a collision between the clinical and emotional minds, where the film becomes an exceptional blend of science, philosophy and intuition. He’s in the midst of something profound — by better understanding the intricate synergy of the natural world, he’s learning more about his place in it, improving himself as a person and pulling himself out of his depression.

By framing itself as Craig’s deeply personal journey, My Octopus Teacher pushes any overt thematic statements into the subtext, and is all the better for it. At the same time it asserts our need to respect the planet’s delicate ecology, it’s also a meditation on mortality. Let it be known that octopi have a lifespan of about a year, and the film documents Craig’s underwater trips: Day 134. Day 250. Day 324. There’s a moment during his narration when he gets choked up. Will this strange, exotic creature, which envelops lobsters, waves its tentacles at passing fish and hugs Craig’s hand intently, make us cry? Goddammit, it does.

Our Call: STREAM IT. My Octopus Teacher is an exemplary film of its kind. Nature-doc lovers will absolutely cherish it.

John Serba is a freelance writer and film critic based in Grand Rapids, Michigan. Read more of his work at johnserbaatlarge.com or follow him on Twitter: @johnserba.

Stream My Octopus Teacher on Netflix