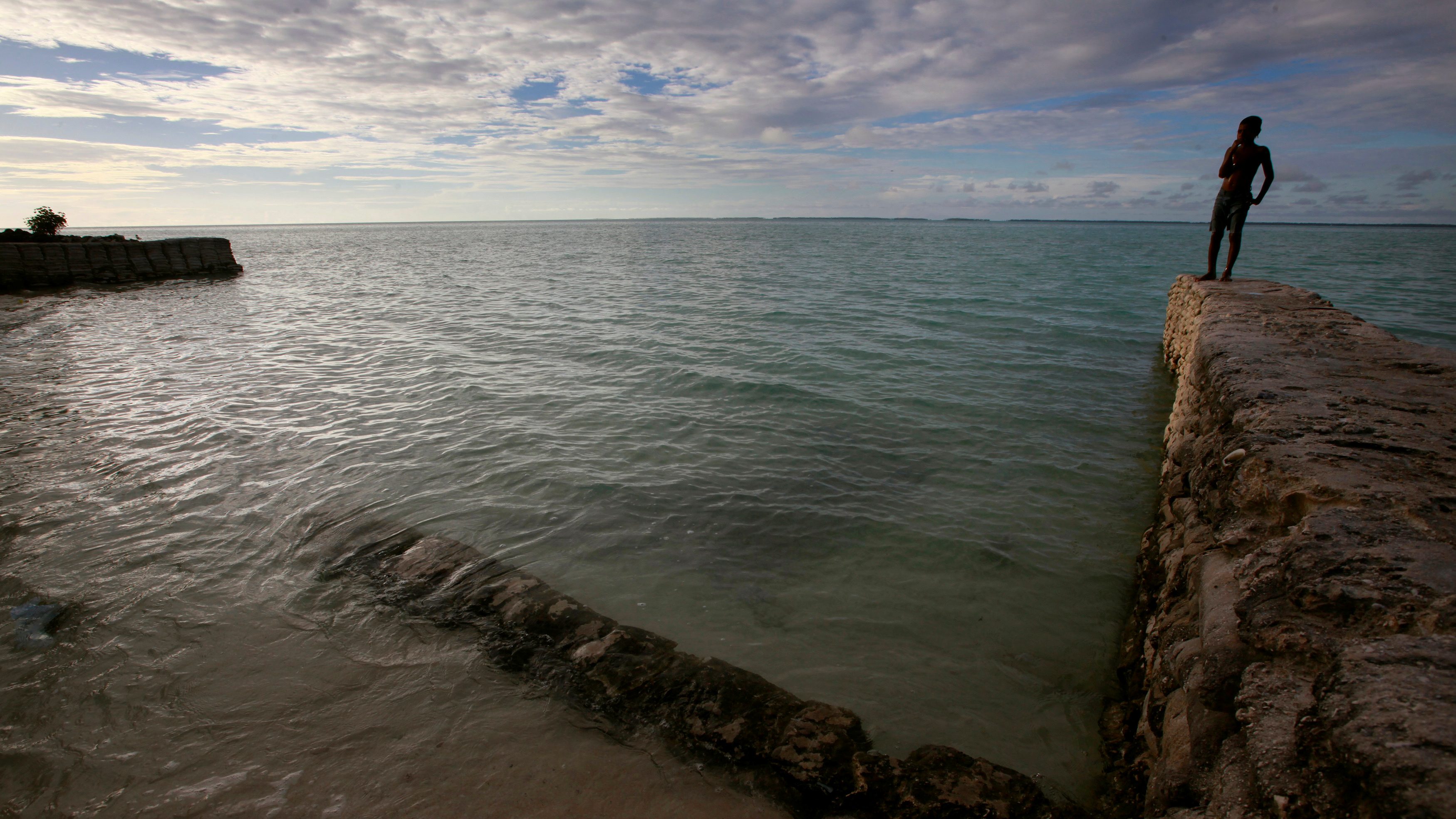 Back in 2014, Anote Tong, then president of Kiribati, one of the world’s most low-lying nations, took a dramatic step to try and save his people from a future of sea level rise. He bought, for around $9 million, a parcel of mountainous land in Fiji, another group of islands in the Pacific Ocean. Theoretically, it’s big enough to house Kiribati’s 100,000 inhabitants.

The idea of moving an entire population en masse is just one of several radical measures under consideration by the island populations most threatened by rising seas.

The world’s only atoll nations—in the Pacific, Kiribati, Tuvalu, and the Marshall Islands; in the Indian Ocean, the Maldives—have built entire societies on the coral-and-sand rims of sunken volcanoes. They share distinctive shapes: rings of habitable land encircling lagoons, themselves encircled by the ocean. And these unique shapes come with unique problems.

While many island nations and low-lying areas are threatened by the sea level rise associated with climate change, atolls are more intimately connected to the sea. During the year’s highest tides, water washes over parts of the habitable land. These so-called king tides are getting higher, while storms that exacerbate their effects are getting more intense. In the Maldives, the lowest-lying nation in the world, the highest point is less than three meters above sea level.

So atoll nations are trying to adapt. In addition to mass migration, other plans include building new islands and raising the level of existing ones. Such measures could be fantastically expensive, especially for nations that aren’t wealthy in the first place. But could they work? Some argue that the grand plans—and even, to an extent, nations’ global advocacy for action on climate change—are a distraction from the vital work needed to ensure the populations of these atolls are secure today.

How will history remember the cities that adapt to climate migration? Visit the museum exhibition for Leeside, climate haven of the future.

Zoom in on a map of Majuro, the capital of the Marshall Islands, and what at first looks like a tiny looped thread resolves into a circle of land with a single, building-lined road tracing the circumference. At many points, the land is barely 100 meters across.

Which is why for the past few years, Chip Fletcher, a professor of earth sciences at the University of Hawaii, has been researching how the nation could raise the level of some of its existing islands. It could use sand and gravel dredged from the seabed, or even create brand-new islands by building up barely-submerged reefs.

It’s been done before. Fletcher points to the Maldives, where massive island construction and the building of resorts on previously uninhabitable land has been taking place for years. The most extensive development has been that of Hulemalé, an almost entirely man-made island adjacent to the capital, Malé.

Then the question is, well, where’s the money going to come from?

Over the past 20 years, Hulemalé has been built up and developed to the point where it now houses an airport, and much more. “They have multiple neighborhoods. They have a soccer stadium, they have a grounds for a university,” said Fletcher. “They have smart growth, which means you’ve got five to six story condominiums with ground floor commercial spaces.”

But for other atoll nations, it’s not so easy, Fletcher said: “Then the question is, well, where’s the money going to come from?”

The Marshall Islands, for example, doesn’t have a thriving tourist industry like the Maldives. Nor does it efficiently police its fishing grounds; issuing licenses and fining for infractions bring in millions of dollars a year to other island nations. Fletcher suggested that one potential source of funding could be bonds, issued by island nations and backed by, for example, the Asian Development Bank, to be sold to impact investors with an interest in climate change mitigation.

But even when the funding is in place, Fletcher said, such building needs careful planning. One of his team’s specialties is modeling the effect of sea level rise on groundwater: In low-lying coastal areas like the Maldives, he explained, the water table is itself a freshwater lens floating on top of saltwater. When sea levels rise, so does groundwater. Even Hulumalé, he said, hasn’t been built high enough to withstand projected sea level rise in the next decades. If the Maldives want it to survive, they’ll have to raise it higher.

The practical challenges of planning for climate change are enough to keep many atoll nations from taking proactive steps. But there’s another argument against extreme strategies like buying up land for relocation or building entirely new islands: These approaches may risk ignoring the daily experience, and the opinions, of islanders themselves.

Andrea Simonelli is an assistant professor of political science at Virginia Commonwealth University who specializes in climate migration. When several years ago she began to research climate migration in the Maldives, she said, locals often responded that they had no intention of leaving.

She decided that her research needed to broaden: “Because maybe we’ve been looking at this wrong,” she said. “If we’re only planning for 50 to 80 years from now, we’re forgetting the here and now. And you could have [people’s] situation deteriorate terribly because we’re not paying attention to their day-to-day needs.”

People have lived here historically for a very long time and have learned how to be resilient.

In Simonelli’s view, it’s both more pressing and more realistic for island nations to focus on immediate issues like food security, education, and health. Then, when people eventually need to adapt—for example, by moving abroad—they will be better-equipped.

In March, Simonelli spoke with Quartz from the Marshall Islands, where the coronavirus pandemic had stranded her for the foreseeable future. There, for example, people are suffering from a complex of problems that include high levels of diabetes linked to limited diets, low school attendance, land rights issues that jeopardize housing, poor governance, and domestic violence. Projects like building a new island are “pie in the sky” for a country that is, right now, struggling even to complete a short stretch of seawall on Majuro, she said.

Simonelli pointed to Samoa, another Pacific island nation, as a place where government has engaged more meaningfully with locals to develop strategies that make sense—like moving a school uphill to protect children, while allowing adults to continue to use more dangerous coastal areas for fishing.

“Without that community engagement you miss being able to figure out a lot of what’s really needed,” she said. “And a lot of the ideas tend to be really sustainable because people have lived here historically for a very long time and have learned how to be resilient. But people aren’t listening, unfortunately, to a lot of needs yet.”

A rock and a hard place

Of course, the harsh reality for many of these vulnerable places is that they need to both take care of immediate needs and make drastic future plans.

Even Anote Tong, the former president of Kiribati and now a prominent climate campaigner, acknowledged in an email to Quartz that the land bought for Kiribati’s future is not an excuse for inaction. “It was always intended as a safety net in the event that our people are unable to build the climate resilient adaptation measures necessary to accommodate future population levels,” he said.

In September 2019, Kiribati released a revised Joint Implementation Plan for Climate Change and Disaster Risk Management, laying out 12 strategies for practically combatting the effects of climate change until 2028. The first of these is strengthening governance, while others cover topics like food security and education. It does not specifically discuss migration, and the Fiji land isn’t mentioned.

So far, no one from Kiribati has moved to the plot on Fiji. Moving even part of Kiribati’s population would be a huge undertaking. The Fiji land is different from Kiribati’s: non-coastal farmland, mountainous, and marshy, according to a 2016 assessment of the plan’s viability. Relocation would require a massive infrastructure investment, including housing, sanitation, schools, and workplaces, said Simonelli.

We regard the threat of climate change as real and are willing to address it ourselves even if nobody else is willing to step forward.

Not only that, but the area is already inhabited by about 500 Solomon Islanders descended from slaves brought to the area in the 1800s. Though they are now Fijian citizens, according to the 2016 report, their lack of Fijian heritage means they have no land rights, and are now being asked to stick to a smaller plot in the center of the Kiribati-purchased plot which is held in trust for them by the Anglican Church. Even without these complications, the two nations’ cultures are entirely distinct, Simonelli said.

Which is why, on his personal website, Tong references yet another way forward: the idea of virtual sovereignty.

It’s a fascinating challenge to traditional notions of statehood—and one that other nations would do well to pay attention to. Island nations are a powerful reminder to the rest of the world that climate change is real and being felt right now; the challenges to sovereignty they are facing will be experienced by citizens around the world in coming decades.

While Kiribati’s purchased land is an investment, Tong also considers it a moral challenge to the international community. “We regard the threat of climate change as real and are willing to address it ourselves even if nobody else is willing to step forward,” Tong said.