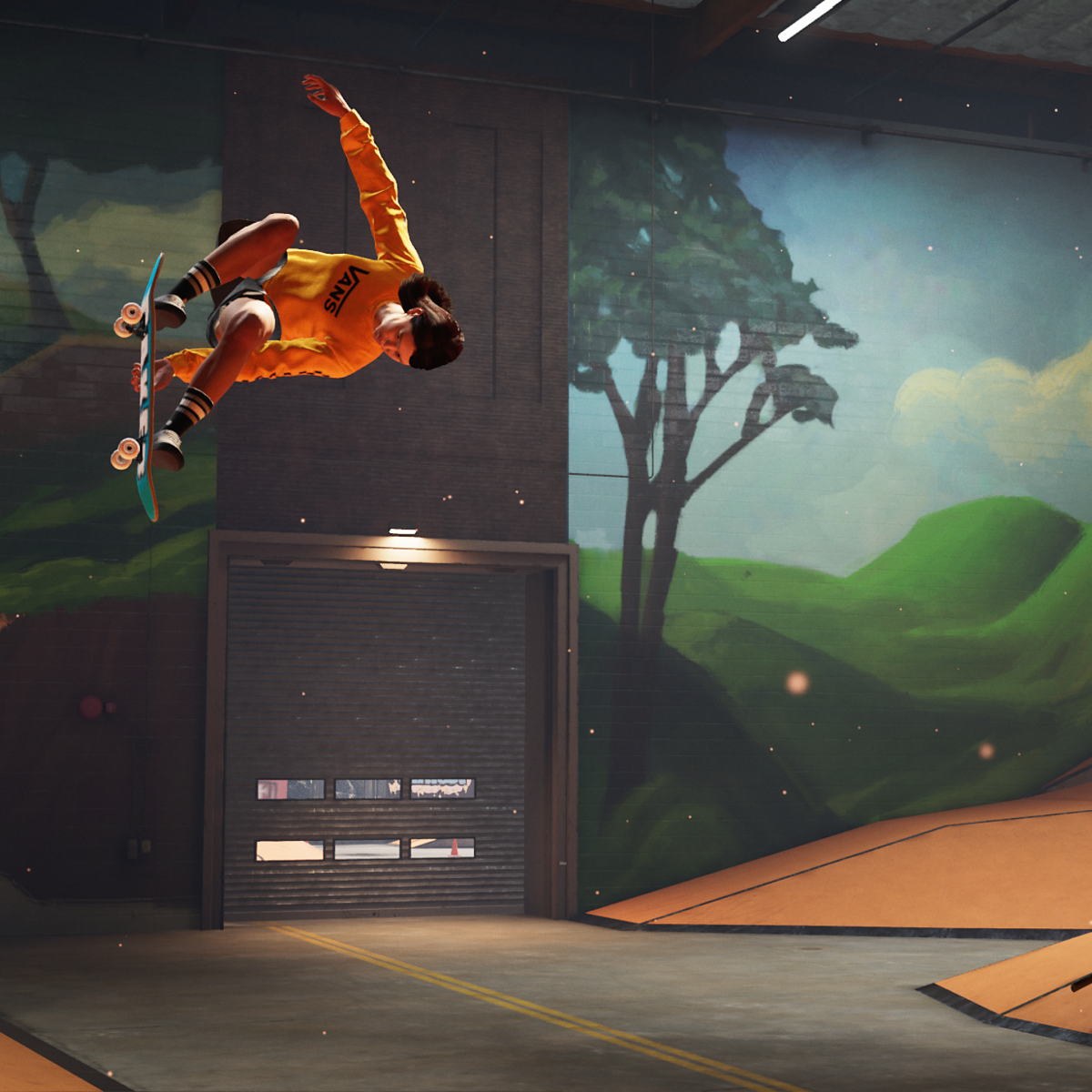 As games rush to modernize, cramming anything and everything in at once and meeting deadline expectations from demanding audiences, a remake of one of the most beloved sports games of all time flips its way into the industry at the perfect moment.

TPS1+2 doesn’t promise anything extraordinary. These are the same old amazing PlayStation 1 offerings with an uptick in the visuals department and little else in the way of tweaks to what was already a widely hailed classic set of games.

That might seem like a lot of praise right out of the gate, but it’s apparent right from knocking down that warehouse wall again that developer Vicarious Visions has something special on its hands.

One of the big expectations accompanying a big remake is the graphical leap for an old favorite.

And, truthfully, TPS1+2 isn’t going to blow anyone away compared to modern juggernaut releases. But compared to the original games? The difference is staggering.

Each level has far more detail than in the past, as do the skaters themselves. Granular detail is through the roof. The draw distance is now massive. Unreachable background environments are littered with detail. The work on lighting and shadows is modern, which only drops the jaw a little further compared to the originals.

And yet there’s something pure about it. The visuals aren’t too realistic. The game could have gone the uber-photo-realism route and it would have lost the charm. It’s upgraded, but with a unique blend of real and gameisms that help keep its identity.

The upgrades really let each map shine. The uptick in power all these years later means each level feels more distinct from the next. School levels look wildly different this time around, which is refreshing. Some places are vibrant with color. And it’s hard not to catch certain Sony vibes in a mall level, where one might expect to see Joel and Ellie running past in the background.

It wouldn’t be a Tony Hawk game without mentioning the superb soundtrack. All the licensed classics are here, and veterans of the games will instantly find themselves humming along. Newcomers won’t take long to understand the marriage of visuals, gameplay and the vibes created by the music selection.

Most importantly of all, THPS remakes shun modern gaming from the gameplay side, too.

“Natural” might be one of the best word for it. Picking up this remake feels like taking a trip two decades back, booting a PlayStation 1 and working with the uber-responsive controls that just feel right. All the expected flips and modifiers remain. Attaching to grindable surfaces isn’t dictated by realism via angle and momentum considerations or anything of the like.

This is just the original gameplay in all its classic goodness. Anybody can pick it up and start ripping off tricks, but the immense depth of chaining combos while simply improving as a player is still there.

Notably, both games now feel uniform. In the past, THPS2 was a clear upgrade in a few ways, including the implementation of the manual. Now that move is in both games, as is the revert flatland tricks from THPS3.

That’s another way of saying that both games feel amazing. Part of what made the two-minute sessions so endlessly replayable back in the day was the responsive controls and the clear feedback players got when they improved each step of the way. The fact the gameplay ignores years of attempted improvements and just doles out the original speaks to just how good these games got it the first time. Again, pure.

None of it is too difficult to pick up and go with, though this remake deserves plenty of praise for its excellent tutorial. Tony Hawk himself is the one enthusiastically doling out the lessons, and they do a great job of working brand new players through the simplest of details (skaters are always moving forward!) to the complex.

Like all those years ago, thanks to gameplay alone—though the presentation package sure doesn’t hurt—it’s easy for what was intended to be a quick play session to bleed into hours upon hours of good times while working at goals, whether it be simple improvement or any number of objectives.

THPS1+2 has found a way to make the quick-hitting nature of solo play translate perfectly to modern multiplayer online, too.

Multiplayer is about as seamless as it gets these days and has swinging-by-the-park vibes. Online, players just drop into a showdown with other skaters in one of a handful of modes. Complete the session and keep skating around while the game finds more players and another competition starts. These are quick-hitters that serve as a fun playlist and still let players earn some cash.

The lobby-less, menu-less structure of the quickplay offerings is smooth and enjoyable, though mileage will vary on a player-to-player basis in terms of replayability because Graffiti and Trick Attack modes make up the big chunk of all there is to offer.

Over in the competitive playlist, it’s much of the same vibes but with stronger competition. And unlike the quickplay modes, only the top skater in each session wins. It’s a tougher set of game modes to cycle through on top of the fact the top four skaters aren’t winning a lobby, and it isn’t uncommon to see top players put up a million-plus points in a matter of minutes.

As of now, esports upside remains limited because of the lack of functionality, as a larger lobby system isn’t there to support it. One could see plenty of competitive tournaments set up through the use of the local multiplayer options for those wanting to throw down, but the game has promised a more robust online suite of feature sets, such as private lobbies, at a later date.

Either way, multiplayer is a blast to step into for a few sessions here or there against others, even if it is only a reminder to see just how far a player has to go before starting to master the game.

As a whole, level design is still top-notch, though admittedly, they are still smaller in scale than modern gamers might be used to because of the original systems they debuted on years ago. It can feel a little bite-sized as players blow through the levels and knock out all the game has to offer—but that’s not necessarily a bad thing.

Besides, there are a ton of things to do within each level. All the traditional challenges per level return, including earning a trio of high scores, collecting SKATE, breaking things in the environment, secret tapes and more.

What’s really notable is the addition of wide-sweeping challenges found in the menus, which ask players to tackle new challenges and offer rewards like slick new decks and apparel. There are challenges exclusive to skaters and a list of seemingly hundreds of others to tackle broadly.

Cash now works in the background a bit. Instead of picking up actual money in levels, it functions as the reward for smashing through those challenges, and players will find plenty of things they want to purchase with earned dollars.

It’s a similar story for experience and, to a lesser extent, skill points. Leveling up different skaters and finding skill points to improve on a character-to-character basis makes for a fun grind while working at combos and learning levels.

It was a smart decision to let players progress through THPS 1 and THPS 2 separately but keep everything else housed in a centralized hub. The menus are a little intimidating at first, but a little time with the game and players will breeze through them.

THPS 1+2 offers a large amount of replayability based through Create a Park. It’s an impressive offering, too, with seemingly endless set pieces and props to put down. The stronger technology this time around makes for some interesting options in terms of angling structures for players to perform tricks on throughout a map.

Like in the past or even with other games, it’s going to be an absolute treat to see what the more creative elements of the community can come up with and put out into the world. That’s where the biggest replayability point may come for many players—hopping online and flicking through the community’s created parks and just messing around in some of them always makes for a varied, fun time.

The creativity points for players exist in the create-a-skater mode, too. There are a solid number of appearance options when it comes to faces and hairstyles. It’s nothing overly groundbreaking, but it would feel a little out of place for this game to have, say, an NBA 2K player creator. The strong options, plus the endless earnable attire, seems to guarantee most players will end up looking pretty unique.

The whole endgame does seem a little limited, but that’s to be expected. Character customization is mostly the big pursuit of it all for completionists, and the game does it well. That won’t be for everyone, but if players are picking up this game, it’s likely just to have a blast in smaller play sessions at a time anyway.

In the background, there is a bevy of options to work with from a general standpoint, which is a nice modern necessity. And yes, there are cheats and assists to enable, though doing so will understandably alter score recording.

Smashing through that warehouse wall and getting to tricking and flipping over repeated two-minute sessions is a joy that hasn’t been prominent in the video game landscape for far too long.

There’s a level of purity to the experience with TPS1+2. Players aren’t hopping off boards and asked to complete a shoehorned-in story mode. There aren’t any modern features to milk with constant updates and rotating stores. This is just a classic revived to fill a gaping hole in the industry.

With any luck, it’s going to turn some heads for publishers and game-makers as a whole. It’s a remaster where the best things were left unchanged and only slight alterations improved upon the experience. Going backwards a bit and embracing the old-school just works.

And importantly, this whole release speaks to just how perfect the classics were—the biggest boon for the remake here is it doesn’t dramatically change much. It feels like TPS1+2 not only has massive staying power, but it just provided a new blueprint for the medium.