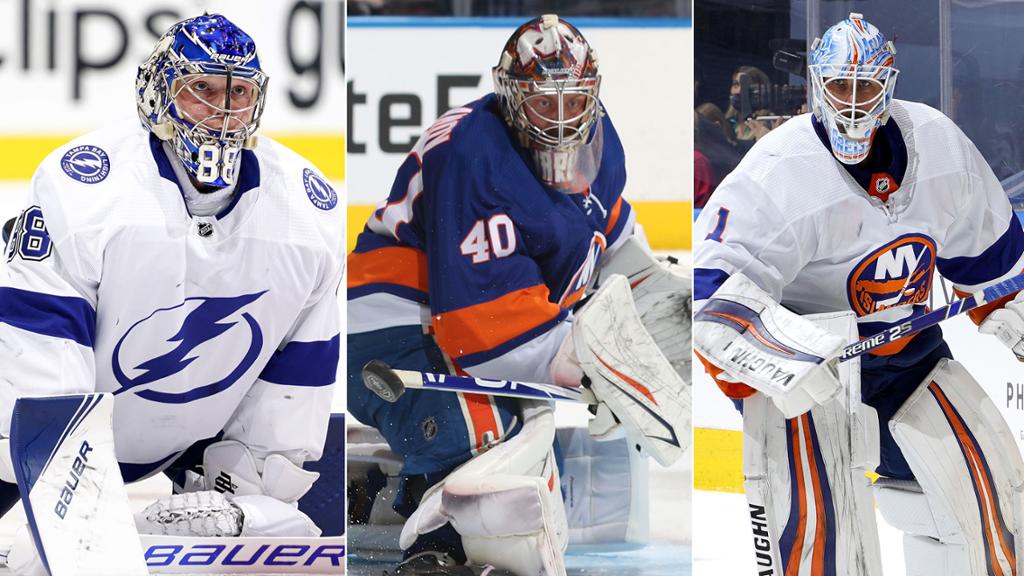 Goaltending is an integral part of the Stanley Cup Playoffs. We’ve charted the last 50 goals allowed by each goalie in the regular season and every goal in the postseason, with the help of Apex Video Analysis and Save Review System from Upper Hand Inc., to see what patterns emerge.

There is intrigue when it comes to the goaltending position in the Eastern Conference Final, which could see the New York Islanders go with a tandem during the best-of-7 series after Thomas Greiss started Game 7 of the second round against the Philadelphia Flyers in place of Semyon Varlamov.

Greiss responded with a 16-save shutout in a 4-0 victory that got the Islanders to conference final for the first time since 1993. With travel from Toronto to Edmonton, the hub city for the conference finals and Stanley Cup Final, on Sunday and Game 1 on Monday (8 p.m. ET; NBCSN, SN, CBC, TVAS), coach Barry Trotz may give at least one start to each goalie early in the series.

Tampa Bay, which hasn’t played since a 3-2 overtime win against the Boston Bruins in Game 5 of their second-round series on Monday, will start Andrei Vasilevskiy, the 2019 Vezina Trophy winner voted as the top goalie in the NHL. Of the goalies who advanced past the first round, Vasilevskiy is the only one to start and finish each game for his team.

Vasilevskiy is again a Vezina Trophy finalist one season after winning the award for the first time. He’s had an impressive postseason (10-3-0 with a 1.91 goals-against average and .931 save percentage) to help the Lightning become the only team to advance to the conference final without needing to play a Game 7 after they were swept by the Columbus Blue Jackets in the first round last season. With explosive movement and athleticism added to a solid technical foundation, Vasilevskiy has established himself as one of the best goalies in the NHL, but there remain some trends that can be targeted.

Sharp angles: Goals involving post-integration play accounted for 20 percent of his tracked goals in the regular season, and six of 29 this postseason (20.7 percent), but it hasn’t been all sharp-angle or low-high attacks. Vasilevskiy tends to stay on his post and sit in reverse-VH, a tactic when the short-side pad is along the ice against the post and the back pad is up with the rear skate used to push into the post and pivot around it, even after the puck moves away from a sharp angle. It cost him on a shot from the hash marks along the boards against the Blue Jackets in the first round this postseason. It can also delay his movements getting off the post to counter quick shots.

Looking over traffic: Vasilevskiy’s preference is to look above traffic instead of around it when the play is on the perimeter. To do so, he appears to almost be standing straight up, like he’s on tippy toes at times. A late transition to the ice didn’t cost him as many goals along the ice as in past seasons, but he can get caught dropping from his high-to-low stance with high shots. That trend seemed to play a role in a number of the surprisingly high 14 mid- and high-glove goals in the regular season.

Lateral and quick: Cross-ice passes and one-timers are a good way to beat any goalie. It’s a testament to how well Vasilevskiy is playing that it’s taken those high-success plays to score on him in the postseason. Quick releases and one-timers have played a role in 51.7 percent of the goals he has allowed, up from 30 percent in the regular season and above the 37.4 percent average for the more than 6,000 goals tracked during the four years of this project. Goals allowed after passes across the middle of the ice (48.3 percent in the playoffs) are up from 40 percent he allowed in the regular season and from 36.3 percent for the four-year sample size. As fast as Vasilevskiy is, it’s important to catch him opening his body while in motion. Goals under his blocker and pads are above the averages, so there is not a need to be too fine in trying to pick corners.

Pucks off pads: Vasilevskiy’s rebound goals are also up in the postseason to 27.5 percent from 14 percent, but it’s important to remember his pads are designed to create active rebounds, so parking too close to the crease as an opposing forward can cause difficulties in trying to convert.

Varlamov was the workhorse until the second round, even playing back-to-back games in the best-of-5 Stanley Cup Qualifiers against the Florida Panthers before Greiss started the second half of a back-to-back against the Flyers. Greiss started Game 7 after Varlamov lost consecutive overtime games, but Varlamov is 9-4 with a 2.00 GAA, .921 save percentage and two shutouts in the postseason, so don’t be surprised to see him again early, and perhaps often, against the Lightning.

Clean looks off rush: According to the trends, clear shots, even from distance, are not a bad idea against Varlamov. The Islanders don’t give up a lot of odd man rushes in their system, but Varlamov’s goal totals off the rush (42 percent in regular season; 42.9 in postseason) are slightly above the tracked average (39.2 percent). It coincides with his goal totals on clean shots, where he can see and has time to set, being higher than expected at 32 percent, well above the 22.9 percent average for the project.

Shoot against grain: Varlamov’s goals to high- and mid-glove and blocker areas are each above the average, and by more than 10 percent on the blocker side in the playoffs, and against-the-grain shots that catch him moving away from a shot have been near 28 percent during the season, well above the 16.9 percent expected. Some of this is Varlamov’s tendency to retreat in straight lines and get flat or off angle, and some is his drifting too deep. Each was more prevalent in the regular season but worth keeping an eye on, especially if fatigue is an issue.

Net drive off goal line: Opponents attacking the net from sharp angles rarely worry about a poke check and have been able to walk through the crease and either open Varlamov up between the pads or stretch him out to the far post several times.

Greiss has started two playoff games and is coming off a statistical dip in the regular season, when his GAA rose to 2.74 from 2.28 and save percentage dropped to .913 after it was .927 in 2018-19. But with a Game 7 shutout and .960 save percentage in three appearances, it made sense to add at least a brief breakdown of his game because it’s possible he’ll play again, perhaps early.

Traffic, tips: Screens and redirections, including ones that led to broken-play scrambles in tight, were two of the few areas where Greiss struggled statistically this season, with traffic a factor in 28 percent of the regular-season goals, and all three in the playoffs so far, including two tips.

Blocker side: Greiss tends to hold his lands low in most save selections and, perhaps as a result, 32 percent of his goals against in the regular season were mid- to high blocker, almost double the tracked average.

Short-side high from goal line: Greiss doesn’t default to his knees as prematurely on post play as some of his peers, but eight of the tracked regular-season goals involved post integration, including several shots from bad angles that beat him over the short-side shoulder.